Titi is a Special Cat created by a collaboration event between Battle Cats and Merc Storia. This character can be unlocked by clearing any collaboration quest in the Merc Storia app. Titi also has an ability that affects most enemies like the Magical Healer, which is Slow. In exchange for her powerful Slow ability, her stats suck. True Form added in update 6.2 gives her a Cat with better attack rate, and multi-hit.

Evolves into TitiCC at level 10.

Evolves into Titi CatCC when obtained from the Titi Awakens! Stages (may be dropped on the first stage but guaranteed on the second stage).

*All stats include 300% Empire of Cats Treasures except for Normal Form's initial stats; Recharge time may vary.
*Time between attacks is the time of the attack from the attack's execution until the next attack animation starts (includes backswing).
For units with multi-hit attacks, attack animation is the part of the animation leading up to the first hit.
*See this section to calculate Titi's stats. 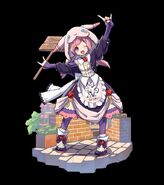 Evolved form description (JP)
Add a photo to this gallery

Retrieved from "https://battle-cats.fandom.com/wiki/Titi_(Special_Cat)?oldid=246662"
Community content is available under CC-BY-SA unless otherwise noted.