Twinstars are an Uber Rare Cat that belongs to the Galaxy Gals set added in update 6.2. Unlike Windy and Thundia, which are two separate units with similar stats, Cici and Koma appear together and they do extreme damage to 2 types of enemies at once. They are available to get via the Rare Cat Capsule since June 27th, 2017. Their True Form decreases recharge time, increases speed and damage and grants Weaken Immunity.

The Twinstars are not the best generalists due to their health, but let them loose on any XP Stage and they will demolish everything. Just make sure to keep them well protected with your meatshields or they will most likely get knocked back before attacking. They are generally not great at quickly killing units that have a wide range or many knockbacks, but, thanks to their multi-hit ability, they are one of the best units for crowd-control and are also able to keep Black pushers at bay by knocking them back every time a foe comes charging.

In stages like Gestalt, Decay, they are one of the best units to use as they don't really kill the enemies quickly but knock them back continuously, which is even better. They have better range than many small units and are more cost-efficient, so it depends on the stage. Twinstars work very well in Into the Future and Cats of the Cosmos too, although the lack of abilities to counter Starred Aliens specifically prevents them from being universally good in the latter.

Unfortunately, their range and attack power are only mediocre, making them bad for generalist usage. Furthermore, against certain enemies, their speed makes them suicidal, and they may die without leaving a mark on the battle, especially in tougher stages.

Divine Twinstars gain slightly higher attack, higher movement speed, a quicker recharge time, and a quicker multi-hit. The only major improvement is the fixed multi-hit, which now has the same DPS through all hits. Aside from that, as all of this is helpful to them as a unit, their rushing abilities improve on a huge scale, but still does not make them outstanding, as they are still not ideal for generalist usage due to their range, and still falter to the enemies they did before. Overall, their True Form does not change much about them as a unit.

*First stats are 1st form's initial, second and third stats include 300% Empire of Cats Treasures; recharge time may vary.
*Time between attacks is the time from the attack's execution to the start of the next attack (includes backswing).
*For units with multi-hit attacks, attack animation is the part of the animation leading up to the first hit.
*Fruit Treasures not included.
*See this section to calculate Twinstars's stats. 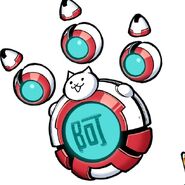 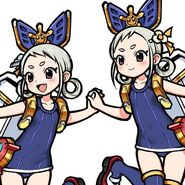 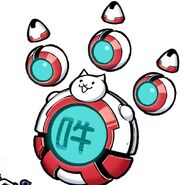