Not to be confused with UFO Cat.

U.F.O. Cat is a Rare Cat that can be unlocked by beating any stage in U.F.O. Strikes! during the Nissin U.F.O. Collaboration Event.

Although it looks like a frailier but heavier-hitting UFO Cat with Barrier Breaker and Warp Blocker at first, this unit also takes much longer (about 3 times longer) to attack than him. Due to it being more damage over DPS oriented, this unit works better than UFO Cat against enemies that the regular UFO Cat wouldn't be able to get more than one hit on, such as Le'boin and Sir Seal.

Its Barrier Breaker can be usable against groups of UltraBaaBaa, but since it's just 20% chance to trigger, it shouldn't be considered reliable and more effective options are aplenty.

*First stats are 1st form's initial, second and third stats include 300% Empire of Cats Treasures; recharge time may vary.
*Attack frequency is the time between an attack is delivered and the next.
*For units with multi-hit attacks, attack animation is the part of the animation leading up to the first hit.
*Fruit Treasures not included.
*See this section to calculate U.F.O. Cat's stats. 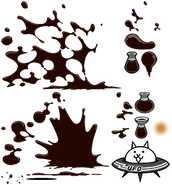 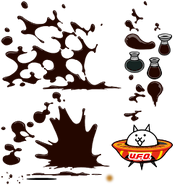