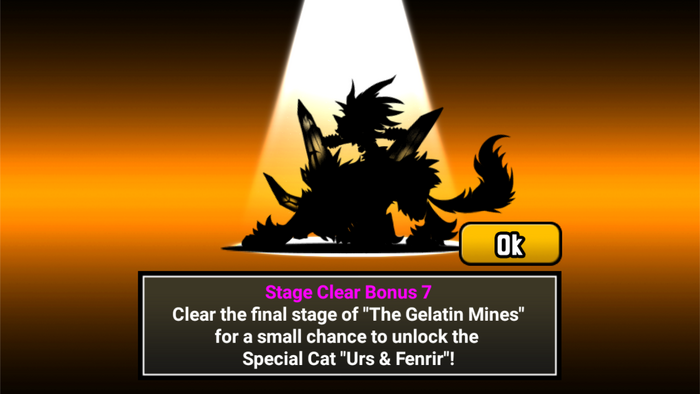 This article is about the Cat Unit. For the enemy, see Urs & Fenrir.
Not to be confused with Ururun Wolf.

Urs & Fenrir are a Special Cat that can be unlocked at a 3% chance when completing Lifesaving Shovel.

Evolves into Urs & Minka at level 10.

Urs & Fenrir are very similar to Ururun Wolf, but have stats between Ururun's Evolved and True Forms. For this reason, Urs is recommended as support for Ururun in stages in which the two of them work better than one or as a replacement in stages where Ururun's knockback ability does more harm than good.

*First stats are 1st form's initial, second and third stats include 300% Empire of Cats Treasures; recharge time may vary.
*Attack frequency is the time between an attack is delivered and the next.
*For units with multi-hit attacks, attack animation is the part of the animation leading up to the first hit.
*Fruit Treasures not included.
*See this section to calculate Urs & Fenrir's stats.