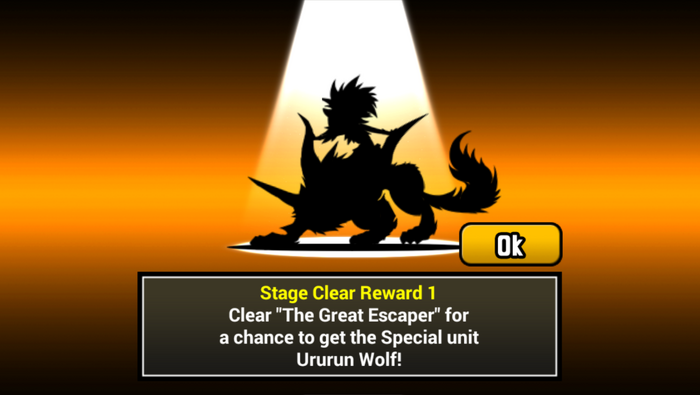 For the enemy, see Ururun Wolf (Enemy Unit). Not to be confused with Urs & Fenrir.

Ururun Wolf is a Special Cat that can be unlocked when beating The Great Escaper. True Form added in Version 7.0 increases health, damage and range and grants Curse Immunity.

Evolves into Ururun Cat at level 10.

Ururun Wolf is one of the the first free Cat Units to have an ability that targets Traitless enemies, but due to the low knockback chance she is more used for general DPS than for crowd-control. She has almost as much range as Bahamut Cat, so she can outrange Le'boin and all of his common variants, as well as knocking them back.

Ururun's role is quite similar to Bahamut's overall, but her faster attack rate and animation makes her less likely to waste her attacks, and is generally more effective than Bahamut against enemies such as Rain Ds, Gory Blacks and Shadow Boxer Ks as she can continuously knock them back with only a small window for them to get to her.

Her main faults include mediocre to average stats compared to Uber/Legend Rares, a high-ish cost, and above-average recharge. However, her quick attack rate helps with the DPS, bumping up to the 4k mark. Her health still remains an issue, though. Overall, use her as another heavy ranged attacker like Bahamut.

Awakened Ururun increases her DPS enough to surpass the average Uber Rare. Her health isn't of the same quality as most Ubers of similar range, though, and her cost/recharge make her uncomfortable to use. Her abilities and extra range skyrocket her usage throughout the endgame, however.

While at first glance it doesn't seem worth the Elder Catfruit, it absolutely is. Through DPS and range, she can almost completely outdo most Uber Rares as generalists, becoming the bar for them to determine whether or not they are above average. Although they tend to have better health, the sheer power she has over them as well as her generalist potential are huge selling points for her. Just keep in mind that she has little room for most of the Uncanny Legends stages, at least until you get to some of the later stages where things somewhat start to settle down.

*First stats are 1st form's initial, second and third stats include 300% Empire of Cats Treasures; recharge time may vary.
*Time between attacks is the time from the attack's execution to the start of the next attack (includes backswing).
*For units with multi-hit attacks, attack animation is the part of the animation leading up to the first hit.
*Fruit Treasures not included.
*See this section to calculate Ururun Wolf's stats.