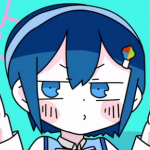 Don't mind the "x" at the end of my nickname, the username "Black Sun" was already taken.

I'm the polar opposite of serious, btw though ironically, i'm a serious person irl but not like you'll ever meet me in person. Though this doesn't means you should never take me seriously.

My actual name is Shiki Nakamura (中村しき), though you can call me Black Sun, 黒い太陽, N-Word Sun, Dioramos Cultist, Chicken Nugget, AAAAAAA, h, Dioramosfan482, or whatsoever. I'm someone who just wanders around the many BC communities that speak the same languages I can speak just to have fun with people while playing this rarted game about cats and shit murdering everyone that is powercreeped beyond hell (which I've been playing since 2017), because every other site I visited is pretty gay. Though, I can be serious at times, but I prefer not to, since hey this is the internet, it's just a world for me to get rid of all the stress and pain life builds on me, which is as large as Daboo's ass.

This "pain" is due to all what I go through in life, important people in my heart leaving or dying, family conflicts, neverending chores, etc. Though thankfully, I have enough optimism to deal with all of it and keep pushing forward at the speed of a Bullet Train, adding in the people I've met in internet to cheer me up and uh, Dioramos. As I've dealt with a lot of situations in life, I show no fear when stating my thoughts here on the internet, regardless of what people think of said topic (i.e: Dioramos), not to mention I don't actually care of about what anyone in the internet thinks about me.

Despite Japanese nativity, I can speak English very fluidly, because I've been speaking it since I was just a young midget. Gotta admit is a lit language, but I cannot get used to English keyboard so my grammar is that of a peanut.

Personally, what other people say about others won't make me respect them, but I can only appreciate people by how they act towards me, my friends, or just people overall. For example, y'all know the Wuffa dude and respect everything he says as if he was your "BC god" or some shit, but what he says means nothing to me because I've never interacted with him personally. Otherwise, I show more respect towards the people that are nicer towards regular users in the community and don't try to flex their ubers or "skill", regardless of these players' "skill", like for example, u/anakinbahmoot and Dreamy.

So to put all of this in one paragraph, i'm actually a weird ass anime girl that enjoys slapping the shit outta BC and having fun with chill people in the EN community, while carrying a lot of burdens behind me that I can just let the online world delete them for me. Dioramos is the only god and i'll only be nice towards people that are nice to my friends. Guess that's it.

P.S: Hokkaido is just a misplaced piece of void

Lifeforms I can consider Friends

To put it in a few words, what I define as a friend are those who can have both good humor and serious attitude depending on the situation, are always there to help others out, don't try constantly to place themselves above others, and are capable of accepting others' opinions whether they agree or not. As well, people who respect users by their personality, and not by vane shit like "skill at the game".

Personally, i'd say my best friend in the BC communities I've been on is Dreamy Cat. He was one of the very first people I met in the EN BC community. Pretty reliable BC player, a tsundere with a wholehearted personality and good moral sense, knows when to be serious and when to joke around, a characteristic that is rather uncommon. Has his flaws here and there and his Razorback bias is as large as Russia, but that's fine, nobody is perfect. Really someone worthy of my respect, i'd really like to spend more time with him.

Anakinbahmoot would be the one I consider the 2nd best user around. Aside from being a fellow Dioramos lover, he also has a sense of humor and is rather nice towards other people, his shitposting isn't excessive, and therefore it's alright.

2D.Bahamut is another user I can consider a good friend. Similar to Dreamy, he knows when to be serious and when to joke, and has respectable morals. There isn't much I know about him, but guess i'll meet him better as time goes on.

Lifeforms I repel from my void

The people I dislike are those with a brain small enough to get common sense, which fits for those incapable of following the rules of whether community they're on, users who cannot support different opinions and therefore want to force other people to change their opinion in a topic without caring how much the other person has grown on this topic (With this, I include people who "give criticism" according to them, but only end up using "criticism" to force their points against the other users in a way that offends and intimidates the other user), and people who enjoy making fun of the flaws of others or what they like/dislike, and try to place themselves on the top, all the time.

Not only a simple user can develop this attitude, but sometimes a entire community does, and it is when it devolves into something worse: Witch-hunting. There have been several users who I've seen that have been witch-hunted before, because of a simple statement they do, and the whole community goes against them and laugh at their opinion and everything they state afterwards. Although sometimes I seriously would like to interfere, I know that if I were to do so, I would end up getting witch-hunted too.

"The Battle Cats is a fun and weird ass game about conquering the world, the future, space, and the past, while beating up the local neighborhood to grind for resources because RNGay is a thing, not a game about "being the best/most skilled player" or "having the most ubers". But, some people have some screws loose and cannot even get this simple point right. These people, as well, most of the time think they have the absolute word on what is fun and not fun in this game. (With this, I can include mostly people from the subreddit and people who think Lucas/Wuffa's words are absolute and flawless). If you really think a wrong statement about a unit's usage in a harmless cat game where players play in whatever style they want is enough to depreciate someone, commit alt+F4"

That's about that, I guess (There are some others, but I ain't wasting my time making a list). Even though there are people I dislike and people I like, it's actually hard to differ as most of the time i don't act seriously, and when I do is to help out others. Though most of these people haven't messed directly with me, but messing with my friends is almost like messing with me. Take that in mind.

Dioramos - The only God i'll praise with my very soul. Excellent combination of offense, defense, and CC capabilities, while being balanced to not be utterly broken. Was actually the very first uber I got when playing BC, and ever since my bias for Dioramos has grown limitlessly. Now I see him as the best uber in the entire game and he's a companion I won't abandon. Although most people see Dioramos as nothing but a meme, I don't see Dioramos like that.

Chickful A - Cute and rather fun to fight

Rekon - Gao but good and not homo

Ammy - Rekon but for stages you need short ass foreswing

Henry - Although annoying, he makes stages much more fun

Razrbec - Just the right amount of HP and damage to be hard, yet beatable with enough power and skill, unless you use the bomb heretic (which Ironically I've never been able to obtain), that is. Dreamy speaks more than I will ever do about him though

M.Ost - It has like fuckin infinite HP and it's KBs only make backliners kill your slapsticks

Gao the Gaylord - Not gonna lie, ever since I saw him on Uberfest, I've disliked him. It worsens when people start saying a unit you dislike is "top tier", and to add insult to the injury, he's been the only uberfest exclusive I've gotten through my runs. I don't dislike his shadow counterpart, though. Hehe F- tier uber, Dioramos is better, change my mind.

Angelic Gory - It becomes worse when buffed and in groups

Angelic Gory - Can we destroy this enemy

Backhoe Cat - Arguably one of the worst Super Rares in the game. I mainly dislike it cause it's my only critter on ITF and he cannot even get the job done vs a Metal Hippoe

Angelic Gory - As gay as Gay the Gaylord

Treasures: Why must they exist

Account progress cause I enjoy torturing myself with this retarded game

All Story Modes and their treasures ✔

Why are you here

- How do counter elephant

- You know what they say, all toasters toast toast.

- Flabber is a dumb ginger

- All the cool children don't do shrooms

- The only good BC players are those who find the hidden potential on those cats deemed worthless by most users, and those who use less powercreep

- Leveling Gao above 1 makes you gay

- Japan is the superior land

- A level is only impossible if you say it's impossible

Retrieved from "https://battle-cats.fandom.com/wiki/User:Black_Sun_x?oldid=392144"
Community content is available under CC-BY-SA unless otherwise noted.