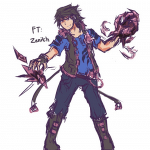 Note: While I'm no longer a moderator on this Wikia (Heli: He's a bureaucrat) I might still be lurking around. You never know!~ But I'll be focusing my time on moderating over on Reddit ;p (It's not the Battle Cats Subreddit, though)

I used to be player of Battle Cats EN, and a long-time member of the Battle Cats Wiki (prev. acc: RCL888)

I've been a really big fan of many mobile games, such as Battle Cats, Brave Frontier, Clash of Clans, etc. and I'm the kind of guy that loves to collect hard data and stuff about the game to progress and have fun.

I'm mostly around to block trolls and revert vandalism, as I lost my hacked Battle Cats account progress and can only fix false info from time to time with my memory of the game.

Hope you enjoy your stay on the Battle Cats Wiki.

Retrieved from "https://battle-cats.fandom.com/wiki/User:ClimmyClim?oldid=91703"
Community content is available under CC-BY-SA unless otherwise noted.