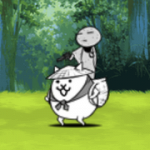 Welcome to my page, Ive been here for a little while and I'll usually edit a thing or two, usually on pages that are mostly finished but need a little correcting or extra information. I first played the game in 2014 somewhere, and then eventually the device I played it on(being a tablet at the time) stopped working. After losing 'so much' progress(literally right before chapter 3 moon and no uber) I gave up on the game. Then on 2015, July 31st. I saw a video of one of the youtubers I watched at the time playing it, me, being ignorant and foolish of the contents of the game at the time, thought that I'd immediately get crazed after beating chapter 1. I downloaded the game on that same day, beat chapter 1, and was met with the cruel realization that it simply wasn't the case. I however, continued playing. Over the years I've obtained many ubers and beaten many stages. As of now, I have completed every 3 star stage in SoL, most 4 star stages(I'm saving a few so I can make good use of new rares/specials that come out or play when I have nothing else to do). I've beaten every other stage in the game, every single one. I have every non uber and non collab cat. Most of the damage/health based ones are all at least between level 40 and 50. and for rares, +20 to +30, for super rares, around +5 to +10. I wish there was a way to de-level cats or set them at a certain level going up to what you currently have them at because thanks to how high level the cats I have are. A lot of stages seem to be rather easy now. I often go into the new UL stages and Advent stages without any sort of plan, strategy, or even knowledge of what's in the stage to challenge myself a bit and find enjoyment until the game eventually progresses to the point where stages prove difficult. A few here and there are a little challenge, but for the most part they're a breeze. This game is indeed, quite fun.

I know virtually everything there is to know about the game,ranging from stats, abilities, mechanics, enemies/cats. I'm not big on interacting with strangers on my wall just for casual conversation and answering questions about the game. nor one for caring about someone's emotional stage. Don't expect, or feel entitled that I'll be nice to you. I don't swear out of rage, anger or as a last resort, I do it either casually, or because I know it hits a certain person right where it hurts. When I use caps it's usually to emphasize a word, not to make it appear as yelling as some people do. I genuinely don't feel anger or sadness over the internet since in the end, it's all pretty meaningless. It's just that the more times someone pushes, the more ambition I have to truly break them, or make them have a strong experience so that they learn from it, and to prevent them from doing it again. ̶ ̶I̶ ̶b̶e̶l̶i̶e̶v̶e̶ ̶e̶v̶e̶r̶y̶o̶n̶e̶ ̶c̶a̶n̶ ̶l̶e̶a̶r̶n̶ ̶f̶r̶o̶m̶ ̶s̶o̶m̶e̶t̶h̶i̶n̶g̶,̶ ̶i̶t̶'̶s̶ ̶j̶u̶s̶t̶ ̶c̶e̶r̶t̶a̶i̶n̶ ̶p̶e̶o̶p̶l̶e̶ ̶r̶e̶q̶u̶i̶r̶e̶ ̶a̶ ̶l̶i̶t̶t̶l̶e̶ ̶e̶x̶t̶r̶a̶ ̶e̶f̶f̶o̶r̶t̶ ̶t̶o̶ ̶g̶e̶t̶ ̶t̶h̶e̶m̶ ̶t̶o̶ ̶r̶e̶a̶l̶i̶z̶e̶ ̶s̶o̶m̶e̶t̶h̶i̶n̶g̶.̶

If you're speaking to me in a private/non public place to tell me something or talk to me, and I'm not interested in hearing it. Or even tell you to go away. It's probably for the best that you listen. No one want's to deal with the aftermath. I'll engage in conversation in other threads or places though. I just don't like people making a personal message just to express them self to me.

People often interacting with me, for better, or for worse. (or even users that I've just taken note of)

Feel free to ask questions, don't go to my message wall to spread how you feel about a unit(especially when no one asked), or to share your opinion, especially if you'll refuse to listen to reason. and if you're Marcsalv1821 then just don't go there at all, if you're one of his alt accounts this applies to you you too. (you can tell because he appears everywhere marc does, and in his first 10 minutes of joining he already had full knowledge on everything marc was involved in, even shares his retarded ideals).

He's a self centered 13 year old in the 8th grade. Who is marc you may ask? He claims to be one of the smarter kids from where he's from. God so help where ever he's from if that's the case. He's some kid who pesters me to get the attention his parents never gave him. He thinks he's entitled to shoving his opinions down everyone's throats, and that any disagreement is a personal attack against him. You'll often see him on the Kasa Jizo page hating on him nonstop just to spite me(even though I don't care lol).He's sent countless messages on my wall, though you wouldn't see them because ive deleted that nonsense. You can also just read his profile. Don't go to him for information on the game. he has little to none, and spreads false information based around his opinion on a unit. Oh yeah, also he spreads lies about others to slander them, and if you just so happen to have an IQ higher than your chromosome count and see through his lie, he'll whine like a baby and scream "gEt OuT oF My LiFE". His grammar is very poor, not in the sense of forgetting a period here and there or not capitalizing some words, but as in the entire structure just hurts to read. He's quick to make a claim, but have no evidence or proof to support it. It's best to just ignore him. It'll save the braincells. He'll always attempt to run from any situation or mess he's created when people aren't on his side. Then he'll expect everything to go back to normal. Like I said, you're better off pretending he doesn't exist. Kinda hard when he's so obnoxious.

A quote made my notnoob1 to basically sum him up "Marcsalv1821: use to explain nothing with everything with faulty and irrelevant sentences with no facts whatsoever, lie and deny the truth by deleting proofs (is basically irrelevant when it comes to explaining and defending himself and Despey!) Can find peace after a while. Will mature someday."

Despey - Born 2007 July 20th. Only interactions ive had with him were on my wall. He's sent quite a few. Hard to tell if he's an alt of marc or someone who's just really passionate about him.

Notnoob1 - He has quite a bit of knowledge based around the game, he's grown a bit from pretty much your standard user on the wiki, to someone who's been made aware of the how the situation of the wiki is, and similar to me, can quickly adapt to fit a new environment. age and date of birth unknown.

JTH studio Born June 9th, 200X. Has about as much knowledge as your typical late game player. Go to him for major questions about the game, He's able to have logical debates. Though in most situations between two people he'll try to remain neutral instead of looking into detail.

Weebkunx1 - Literally just some random, i started getting these bit more often, he has no character, just an asshole. I'm not putting him here because of him soley, more as a placeholder for multiple new accounts that are suddenly created just for this, most likely all of them are alts.

Chalkosis - some user who's quick to take sides, they've grown a slight bit in the recent events happening here. They seem to have slightly better judgement on situations now.

LemonCakeDude - self proclaimed most knowledgeable person on the wiki in all things battle cats. Though not far off, I'd easily set him in the top 5 on the wiki without question. He knows his stuff. He's also someone I'd recommend to go to for major questions about the game

Ariel_Ontiveros - Often intrudes himself into situations that don't involve him and attempts to be some sort of almighty peacekeeper, he has two accounts, ones a black pfp and the other's white. Unlike a certain someone he isn't self conscious enough to pretend it's not him. Knowledge on the game? I couldn't tell you but from what I've gathered it's none too outstanding.

DarkenedXavier - A hard working admin who cleans up some of the messes I and a ˢ̷ᵉ̷ˡ̷ᶠ̷⁻̷ᶜ̷ᵉ̷ⁿ̷ᵗ̷ᵉ̷ʳ̷ᵉ̷ᵈ̷ ̷ᵘ̷ⁿ̷ᵍ̷ʳ̷ᵃ̷ᵗ̷ᵉ̷ᶠ̷ᵘ̷ˡ̷ ̷ᶦ̷ⁿ̷ᶜ̷ᵒ̷ⁿ̷ˢ̷ᶦ̷ᵈ̷ᵉ̷ʳ̷ᵃ̷ᵗ̷ᵉ̷ ̷ᵖ̷ᶦ̷ᵉ̷ᶜ̷ᵉ̷ ̷ᵒ̷ᶠ̷ ̷ᵉ̷ʲ̷ᵃ̷ᶜ̷ᵘ̷ˡ̷ᵃ̷ᵗ̷ᵉ̷ᵈ̷ ̷ᵒ̷ⁿ̷ ̷ʳ̷ᵃ̷ᶜ̷ᶜ̷ᵒ̷ᵒ̷ⁿ̷ ̷ᶠ̷ᵉ̷ᶜ̷ᵉ̷ˢ̷ Certain individual have made. I apologize for any inconvenience caused and will stray away from things that would give the wiki a bad rep in very public places.

Ubers that I have.

These are my ubers, all listed as the highest form i have them in. Some arent TF because i got then recently, or didnt feel the need to TF because I didnt have any use for them.

and as for legends: Gaia the Supreme

WOAH WOAH WOAH THERE now before you get your pitch forks and torches out because it's not following the same methodology as the traditional reddit tierlist, hear me out.

this is a tierlist based soley off my experiences. It doesn't apply to anyone. It's not my entire game experiences, or one just off of the ubers I have, it is where I currently am, and how useful each cat has been to me. Some cats are rately lowly simply because by the time I got them, they weren't of any use. How much an uber gets replaced by another uber also effects this, and because of this is not about general use, it's mostly about how each one helped me. Some ubers are as high as they are because at certain levels, they actually can come in handy EX: nobiluga, naturally, he's known to be shit. But since I've had him at level 50+1. I can ignore his major flaw which is his damage, and focus on his effect range, which often does a good job. Some ubers I don't use super often, but when I do, they're absolutely amazing. Like aphrodite. I don't bring her unless the stage requires LD.

I didn't actually put too much thought into it though.

(Gaia is in S+ tier between jizo and chronos she just didn't have a picture for her, reason is because yeah she has a major flaw, but have you tried having her hit? She deletes every traited enemy she attacks. Heck if I had mitama. Then I would have her moved up to SS tier with her just because of how well they work together.

Retrieved from "https://battle-cats.fandom.com/wiki/User:Ka$aJ1zo?oldid=358607"
Community content is available under CC-BY-SA unless otherwise noted.