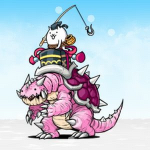 King gamereon currently has the highest health in the game,it can take 108 hits from two can counting the shock waves

R. ost:annoying birb that will make you rage

brollow:do I even have to say anything?

owlbrow:easy to stall and gives you alot of money

I have beaten all of stories of legend sub-chapters

I have beaten all cyclones

I Have beaten all story chapters

Retrieved from "https://battle-cats.fandom.com/wiki/User:Leglesslego?oldid=190323"
Community content is available under CC-BY-SA unless otherwise noted.