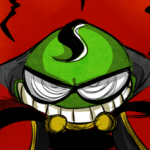 Hey there, it's me, WhyDoIHaveToBeABean. But you can just call me Bean or Beanie. I just do whatever here.

Hi, it's Bean with Sham-Gao. Are traited enemies buttfucking you? Do you need an Uber than can output great damage against the enemies? Look no further, Gao has you covered. You can kiss those Shy Boys and Shadow Boxer Ks goodbye~ Now if only he had Zombie Killer...

The enemies I hate the most (as of right now)

Why I hate the enemies I hate

To all of these people, I hope that whatever tough times may be plaguing you at the moment, you get through them with ease.

Retrieved from "https://battle-cats.fandom.com/wiki/User:WhyDoIHaveToBeABean?oldid=392280"
Community content is available under CC-BY-SA unless otherwise noted.