Ushiwakamaru is a Legend Rare Cat that can be obtained at an extremely low chance when playing the Rare Cat Capsule during the Ancient Heroes Ultra Souls event.

Evolves into Colossal Benkei at level 10.

Like the other Ultra Souls, Ushiwakamaru has significantly different stats between Normal (spammable) and Evolved Form (high performance), both of which can be used effectively depending on the situation.

Colossal Benkei is fairly similar to any Uber with ~450 range, aside from his moderately higher attack power and DPS, with extremely high health pool which allows him to shrug off attacks from any Angels capable of reaching him, aside from Cala Maria. Unfortunately, he also costs as much as Mighty Lord Gao and takes about as long to recharge despite being considerably less impressive as a generalist. Lastly, although Benkei hits hard, his DPS is quickly trounced by a stack of 3 or more Ushiwakamarus, making his Evolved form inferior in stages where long range is unnecessary.

In summary, Ushiwakamaru is a great anti-Angel cat who combines the best traits of other great Cats. Do not hesitate to invest in this Cat, as when leveled, he can effectively destroy Angel enemies as good if not better than these mentioned Cats.

*First stats are 1st form's initial, second and third stats include 300% Empire of Cats Treasures; recharge time may vary.
*Attack frequency is the time between an attack is delivered and the next.
*For units with multi-hit attacks, attack animation is the part of the animation leading up to the first hit.
*Fruit Treasures not included.
*See this section to calculate Ushiwakamaru's stats. 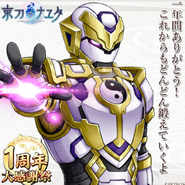 A character from the Kyoto Project similar to Colossal Benkei