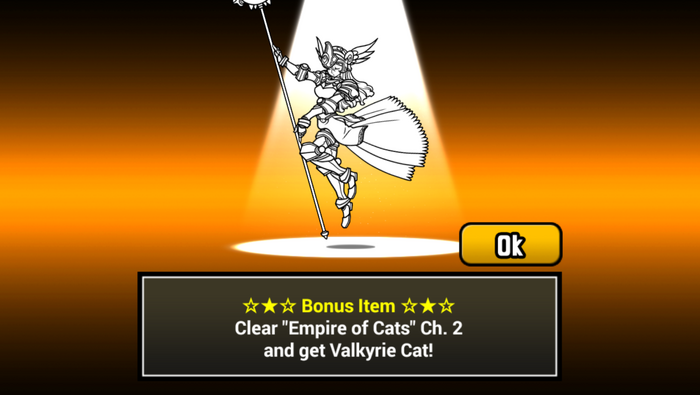 For other uses, see Valkyrie (disambiguation).

Evolves into Holy Valkyrie Cat at level 20 after completing Into the Future Chapter 2.

Valkyrie Cat is very useful for Empire of Cats Chapter 3 and the early stages of Stories of Legend and Into the Future. However, she can later be replaced by Bahamut Cat and Ururun Wolf. She is one of the first ranged attackers to deal area damage, which makes her a valuable asset in attacking groups of enemies while staying relatively safe in the back. While she might not be as fast as other units, be careful when to summon her, as it can lead her right into a boss' attack. It's best to summon her before or about when the boss spawns so that she can line up with other cats.

Unfortunately, Valkyrie Cat's True Form doesn't improve her stats enough to be relevant again outside of 4-Crown stages, which she is outclassed by due to Bahamut Cat and Ururun Cat existing, both of whom are much easier to stack and have higher range than her, not even mentioning their True Forms. More importantly she gains a chance to Freeze all Traited enemies aside Metals, which comes in handy for Tiny Horns and the variant stages of Crazed Cow. This can also be used to Freeze Traitless enemies, which is irreplaceable early on into the game provided you do not have Vendor Cat & Kitten.

*First stats are 1st form's initial, second and third stats include 300% Empire of Cats Treasures; recharge time may vary.
*Time between attacks is the time from the attack's execution to the start of the next attack (includes backswing).
*For units with multi-hit attacks, attack animation is the part of the animation leading up to the first hit.
*Fruit Treasures not included.
*See this section to calculate Valkyrie Cat's stats.

She was added as an Uber Rare unit during the third collaboration between YuruGeGe and Nyanko Daisensou. Unlike most of the other units from the collab, she is rendered in the Battle Cats art style.

Description:
戦いと勝利を司る戦乙女であり、にゃんこ界では崇められている。
にゃんこ界に戦場がなくなったことで、暇を持て余しているがにゃんこ神様からのデートの誘いを断るため、日々、忙しいふりをしている。
A warrior who decides the victory of a battle and is widely worshiped in the Cat World.
With the battlefield in the Cat World gone, there is a lot of time for me to spare, but I have to pretend I am busy everyday in order to refuse Cat God's dating request.
Quotes:
にゃんこの半分は優しさで、私の半分は戦いでできている
A half of Cat is kindness, A half of me is to fight

Valkyrie Cat appears in Monster Hunter as a card.