The Variety Bears (レインボークマトーク Reinbō Kuma Tōku, lit. "Rainbow Bear Talk") are a Red/Floating/Black/Angel/Alien/Zombie variant of Audience Bears introduced in Bears Be Back.

The bearbershop quintet, now in color! Compared to the Audience Bears, they are slower, have fewer knockbacks and do less damage with each attack, but don't let that fool you into thinking they're harmless. They can Knockback, Freeze, Slow, Weaken, and/or Warp any unit in their large attack range, and thanks to their multi-hit ability, they have three separate chances for all of these status effects. While still not much of a threat by themselves, they can easily cripple your units (or remove them from the field entirely), allowing other enemies to advance unimpeded. Their greatest weakness is the number of traits they have, giving the player no shortage of units that can deal effective damage or status effects on them, assuming they can get into range. 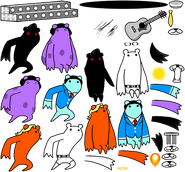