The Cat Base now can be modified /strengthened more. The classic base can be upgraded to have higher health and cannon power. In addition, 3 new bases were introduced:

Iron Wall Cannon 「鉄壁砲」
Add a photo to this gallery

Each new cannon have a special ability (Slowing enemies or creating a metal-attribute wall), the player can build them by using Ototo, Gamatoto's brother. Each base has 3 stages to be completed and require specific materials gathering throughout the Stories of Legend levels. To build/upgrade the base, the player needs material and building assistants, which can be recruited along with Gamatoto's assistants after his expedition.

Ototo Development Team can be accessed by the same way as Gamatoto Expedition. Building the base will takes 12~24 hours, which can be depleted by Catamns. 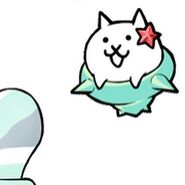 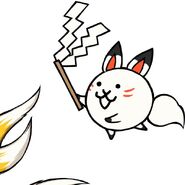 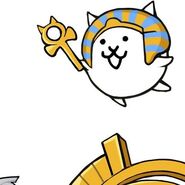 Cat #3
Add a photo to this gallery 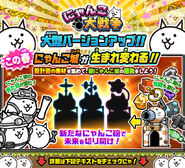 Base development
Add a photo to this gallery
Retrieved from "https://battle-cats.fandom.com/wiki/Version_6.0_Update_(Japanese_Version)?oldid=397057"
Community content is available under CC-BY-SA unless otherwise noted.