Wicked Beauty is the third stage in In the Sleeping Forest. 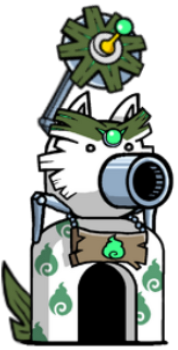 Castle of the Wicked Beauty Witch

Aria of the Princess

Catman's true form really shines here, as he does massive damage to the Oldhorn and Bun Bun Symbiote. And, he is immune to curse which makes the Relic Doge Base harmless. Bring him, iCat, meatshields, and Awakened Bahamut. Some extra anti-reds help, too, as the Bore here has a massive 1,600,000 HP. Luring is a viable strategy here as the Relic Doge base has limited range, Curse Immune talents and Curse Resist talents that you may be able to get on some of your units should be good here.

You should bring Ultra delinquent, Rodeo, and Gato Amigo for the oldhorn, iCat and Roe for the bore, Seafarer or Necrodancer and Octopus for the bun bun. Lure as much as you can to avoid relic cannon’s curse.