Not to be confused with the stage Wicked Tank or its Cat counterpart Brainwashed Tank Cat.

Wicked Tank Cat is a Tank Cat-turned-Aku. He appears in the Wicked Tank event stages. Unlike Crazed Tank Cat and Manic Eraser Cat, he is not obtainable as a Cat Unit, but is rather used as a mission to give 50 Cat Food. However, he was given a Cat Unit counterpart in Version 11.0, though that unit needs to be rolled in a gacha banner.

The Gates of Aku

Wicked Tank Cat is basically a nerfed Crazed Tank Cat with the Aku trait. He has a good amount of health, though not nearly as much as Crazed Tank Cat or Manic Eraser Cat and 10 less range than both of them. Its attack power and DPS are very low, but it has a level 1 Surge Attack that can reach past its attack.

Unlike the Crazed Tank, this enemy has low DPS, but a surge, making it radically different, in that while Crazed Tank is strong against tanky cats, which it can destroy with ease, but is weak to spam of weak cats, the Wicked Tank is the opposite, as it can keep weak meatshields away, but lacks the power to do much about tanks that get in its close proximity, making tanky cats like Titan Cat or Whale Cat highly effective against it. 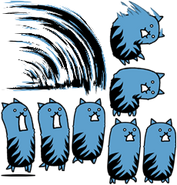