Witch Cat is a Rare Cat that can be unlocked by playing the Rare Cat Capsule. True Form increases her range, her health and the duration of her ability.

Evolves into Sorceress Cat at level 10.

Evolves into Enchantress Cat at level 30 using Catfruit and XP.

Witch Cat is one of the better non-Uber options for stalling Red enemies - especially in 4-Crown stages, where iCat becomes unavailable. Stack enough Witch Cats and short-ranged Reds like Bore and Red Cyclone will barely be able to move at all.

More range and higher slow duration says it all. With this True Form unlocked, Enchantress Cat can now outrange J.K Bun Bun, and with a higher slow uptime, she can be more consistent at keeping Red enemies slowed, halting their progress even more.

Talents allow Enchantress Cat to slow down Zombies as well as Red. Enchantress Cat's 250 range is sufficient enough to outrange the majority of Zombie enemies, making her a very worthwhile choice against them. Enchantress Cat also has the Survives talent, which makes her even more cost-effective. But her Attack and Defense Buff Talents are not worth investing in, nor is it recommended to equip her with any Talent Orb.

*First stats are 1st form's initial, second and third stats include 300% Empire of Cats Treasures; recharge time may vary.
*Time between attacks is the time from the attack's execution to the start of the next attack (includes backswing).
*For units with multi-hit attacks, attack animation is the part of the animation leading up to the first hit.
*Fruit Treasures not included.
*See this section to calculate Witch Cat's stats.

In Battle Cats Quest, Witch Cat appears as a merchant who allows the player to upgrade their defense, attack and coin value before she attacks them. 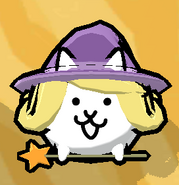