Wolfchild Deale is an Uber Rare Cat that was added to the Girls & Monsters: Angels of Terror set in Version 6.4 on August 30th, 2017. She can be unlocked via the Rare Cat Capsule when said event is held. True Form decreases time between attacks.

Deale can be a useful midranger/supporter to deal with bulky Angel/Alien enemies with few knockbacks, particularly Angelic Sleipnir, since Sleipnir is not only tanky, but he can also use his knockback ability to push slowly, something that Deale's knockbacks can counter. Thanks to her multi-hit ability, she has a very high chance to knockback Angel/Alien enemies, which can help in case you get cornered.

However, in case you're fighting fast, strong pushers like Angelic Gory or Teacher Bun Bun, always bring bulky cats (against Angels, it's recommended to bring Ramen Cat) to protect her, as her knockbacks may fail and give you trouble. Using her against these won't do much though, as they'll gain the ground they pushed to very quickly, making the knockback do nearly nothing other than adding a chance of leading hitters to miss.

Getting the True Form is pretty cheap, and only gives Deale one change: she now has less time between attacks. This wouldn't be much, but now she has almost 7.5k damage per second. This is the highest base DPS of all cats with 415+ Range who can hit every trait. This makes Deale one of the best general damage units in the game. You will have to be wary of her ability, you still should avoid bringing her to Angel and Alien stages with backliners. While she loses promience later into SOL and UL with most generalists, she can still be a great choice when no specialist would work.

*First stats are 1st form's initial, second and third stats include 300% Empire of Cats Treasures; recharge time may vary.
*Time between attacks is the time from the attack's execution to the start of the next attack (includes backswing).
*For units with multi-hit attacks, attack animation is the part of the animation leading up to the first hit.
*Fruit Treasures not included.
*See this section to calculate Wolfchild Deale's stats. 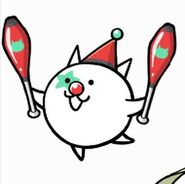 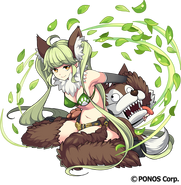