Wrathful Poseidon is an Uber Rare Cat that can be unlocked by playing the Rare Cat Capsule during the The Almighties: The Majestic Zeus event and the Metal Busters event. Like Kalisa, Poseidon has high mobility and a good attack rate in exchange for lower health and shorter range. True Form added in version 9.10 increases his health, attack power and speed.

Evolves into Valiant Poseidon at level 10.

Evolves into Almighty Poseidon at level 30 using Catfruit and XP.

Poseidon has high speed, decent health and decent damage and his ability is very good. He is an excellent counter to strong Metal/Zombie foes (Super Metal Hippoe, Sir Metal Seal, Zir Zeal, etc.) and so this makes him a valuable unit on many Metal stages or Zombie stages, but often Zombies have higher range.

However, take into account that one Poseidon isn't enough to stop foes with high DPS (especially Cyclones) from reaching your cats, due to his slow attack speed. However, when stacked, this unit can stop a Metal/Zombie enemy endlessly. Two or three Poseidons (depending on your timing) are enough to make the most of his ability.

Poseidon's talents are interesting, his most notable ones are Savage Blow and Dodge, Savage Blow is pretty good, boosting his dps to 10k in average, poseidon is now worth bringing in general usage as a powerful midranger rusher, while the proc chance might seem low, he has rebound mechanic to make up for it and synergizes well, it's still rng though so you can get unlucky at times, but overall it's a talent worth investing if you want him to be more than a crowd crontol unit.

Dodge gives him a layer of defense, which is very useful, mostly in his zombie niche, where he had some bad match-ups from Cadaver Bear and Zamelle, however, the low proc and short duration makes it not worth investing, if you do anyways, it's better leveling it up to 1, as the only thing that changes between levels it's the duration, not the proc chance.

Freeze resistance it's most of the time useless, as poseidon is fast enough to enter the blindspot of Henry, there are currently no metal enemies with the Freeze ability, and while it may be for countering Zir Zeal, poseidon has a high number of knockbacks, letting him escape from it anyways.

Stat boosts are nice to have, but it's recommended to boost him with catseyes first, attack up being the best out of the two.

*First stats are 1st form's initial, second and third stats include 300% Empire of Cats Treasures; recharge time may vary.
*Time between attacks is the time from the attack's execution to the start of the next attack (includes backswing).
*For units with multi-hit attacks, attack animation is the part of the animation leading up to the first hit.
*Fruit Treasures not included.
*See this section to calculate Wrathful Poseidon's stats. 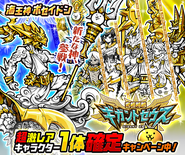