What is GeGeGe no Kitarō?

The GeGeGe no Kitarō series chronicles the adventures of Kitarō, who strives to maintain peace between humans and Yōkai. Beginning as Hakaba Kitarō, a kamishibai written by World War II veteran, mangaka and yōkai enthusiast Shigeru Mizuki in 1960, the series has spawned countless games, anime, movies, novels, merchandise, and even a wiki with over 3,000 articles.

For an in-depth look at the franchise's history, see these articles:

Gameplay is best described as The Battle Cats cranked up to eleven—more polished but even more unforgiving. While the game itself plays almost the same, unit stats are generally more extreme than in The Battle Cats, and there are many challenging new enemy types and abilities such as Self-Destruct, Weakening Aura and Reincarnation. However, the game is also filled with numerous "quality of life" improvements, including a more detailed Character Guide which shows units' exact stats and abilities.

As its name suggests, YuruGeGe uses the character designs from the Yuru-i GeGeGe no Kitarō line of merchandise, hence most of them are based on their 2007 anime depictions. Playable characters are listed in the Team Yuru~i section of the Character Guide, yurui meaning "loose", "lenient", or "easy" (as in "take it easy"), while enemies are found under Team Yaba~i, yabai meaning "dangerous", "risky", "highly concerning", etc.

A wide range of friendly GeGeGe no Kitarō faces major, minor and everything in between appear as allies, including the many iterations of Kitarō, Medama-Oyaji and Neko-Musume as well as characters like Aoi, Nezumi-Otoko and Nurikabe. Allies are sorted into six rarities: Normal, Special, Rare, Super Rare, Uber Rare and Legend Rare.

An outdated list of playable characters can be found here.

The enemy lineup consists of many antagonistic Yōkai from all parts of the GeGeGe no Kitarō franchise, including Backbeard, Nurarihyon, Shu-no-Bon, Vampire Elite (Johnny), Zambia, Vodyanoy, and more. Like in The Battle Cats, each enemy is assigned at least one of several typings or traits:

Some bosses in this game have multiple phases. An example is Qi, who switches to his Nine-Tailed Fox form after his first health bar is depleted, though this does not happen in every stage.

An outdated list of enemies can be found here.

Just like The Battle Cats, YuruGeGe has three story arcs or sagas with three chapters each. The first deals with the hostile Yōkai rampaging throughout Japan, culminating in a fight against Nurarihyon and Kani-Bozu at the end of Chapter 3. The second saga is the aptly named World Arc, which introduces the Serious enemies and most of the Western Yōkai; Chapter 3 of this arc ends with Backbeard as the final boss and introduces the Death enemy variants and their Pentagram Barriers. The third arc presently only has one chapter available, which takes place in Jigoku itself and features many Death enemies as well as Akuma like Belial, pitting Kitarō and friends against Enma Daiō in what is currently the final stage. Every three chapters adds one more stage; the Japan Arc has 48, the World Arc has 49, and the Jigoku Arc has 50.

The game also has its own version of Legend Stages (Stories of Legend, Event Stages and Collaboration Event Stages, all of which still use ★ difficulties instead of Crowns) and a raid boss feature which acts as the equivalent of the Ranking Dojo.

YuruGeGe has had multiple collabs with Nyanko Daisensou, introducing Kitarō, Medama-Oyaji and Neko-Musume as both Cat Units and Enemy Units. YuruGeGe's side of things featured Cat, Tank Cat, Gross Cat and Fish Cat as both friends and foes as well as Gorgeous and Hercules variants of the aforementioned cats, Macho Leg Cat, Mythical Titan Cat and Hurricat exclusively as enemies. The most recent version of the collab added Valkyrie Cat and Miko Mitama as Uber Rare units, and both are rendered in the Battle Cats art style.

It also had two collabs with Kyoto Project, bringing characters such as Kyosaka Nanaho into the game, and one with Hikakin, adding a Hikakin version of Nurikabe. Other collabs include Yo-kai Watch, Ojamajo Doremi, the GeGeGe no Kitarō anime and manga as well as Miracle Gucchi. 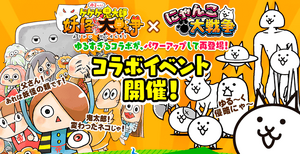 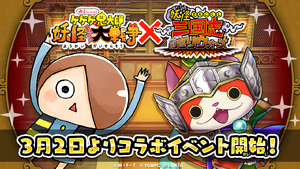 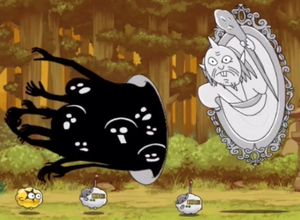 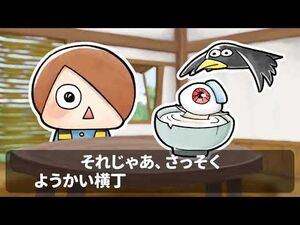