Znache (にょろろん Ni ~yororon, Nyororon) is a Zombie enemy that appears during Zombie Outbreaks in Empire of Cats and Into the Future, and the Legend Stages.

This Snache variant has much higher stats and Area Attack, like other Zombie enemies, it can also revive with 50% HP when killed, and can burrow under your units.

There is not much to it, but most of the strategy with dealing for Znache is to get it out of your backline as quick as possible. Cadaver BearCat or something similar, like Bullet Train Cat does this well. Other units can also work, but they have to be rushers or have to brute force Znache so he does as little damage as possible to your frontline. It is still a peon, but that burrow distance is no joke in some stages. 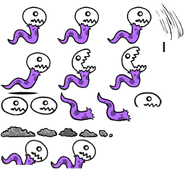