Zoge (ゾンビワン Zonbiwan) is a Zombie variant of Doge that appears in Zombie Outbreaks, The Aku Realms, and Legend Stages.

Zoge is the basic Zombie enemy, and so he doesn't do anything noteworthy apart from reviving and burrowing. He's much slower than Doge Dark and Gabriel, but his abilities can briefly put a halt to your front lines. Due to his strong Area Attacks, it may be riskier to stall groups of Zoges in front of the Cat Base than with other basic peons.

Zoge is generally more of a nuisance than an actual threat. If you really have a hard time with him in Zombie Outbreaks, a good strategy is to spam Giraffe Cats and Artist Cats to attack the enemy base head-on and trigger the burrows of any Zoges and other Zombies that may be spawning from it. Otherwise, you can use Giraffe Cat to have him burrow early and then use strong attackers like Dragon Cat and Mythical Titan Cat to take him out in a few hits, or stack UFO Cats while protecting them with Macho Cats and Wall Cats. Obviously, Area Zombie Killers such as Polevaulter Cat, Li'l Flying Cat and Cadaver BearCat excel against Zoge, although only Polevaulter Cat is realistically obtainable before this enemy becomes irrelevant.

Into the Future Outbreaks

Cats of the Cosmos Outbreaks

Strength magnifications are 250% in Chapter 1.

UFO Zoges were the second- rarest and strongest class of UFO Doge in Nyanko Defence Force. Like most normal enemies, they could rarely appear as sparkling, which would drop either an item or a type of gem. 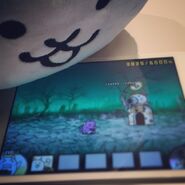 Zoge in a teaser for the Zombie enemy type